Showing posts from April, 2011
Show all

Upgrading to a new MacBook Pro 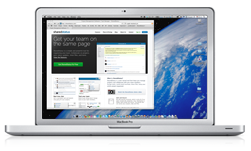 We were sitting around the dinner table when my daughter called to tell us that her MacBook—which had loyally served her through he entire college career— had died . The hard drive was failing, she was three weeks from graduating and needed a solution quickly. My wife and I discussed options for how to deal with it and then she said something incredible: Wife: ″David, you’ve been talking about getting a new MacBook Pro. Why don’t you get it now and ship your older MacBook Pro down to her? She could have it tomorrow if you do this now.″ Wife: ″David? Where are you?!?″ Too late, I was already driving to the Apple store. The ″Problem″ With Macs When I was a Windows developer (1990 to 2008) I found myself upgrading my machine with pretty regular frequency. It wasn’t that the hardware was that far off the state of the art, it’s just that Windows had a tendency to degrade over time, to the point that within a year and a half the machine felt very sluggish. The normal solution wa
16 comments
Read more It was a perfect late winter day outside - abnormally sunny and warm. I decided that rather than spend it in my office I’d grab my MacBook Pro and take it out on our deck, feel that nice breeze and work through some code. I got comfortable, flipped it open and started to plug away in Xcode. Everything was ideal - so much so that I’m sure photographs of me sitting there would have made for great stock photography for some web site. After about 15 minutes of moderate use I looked at the status bar and noticed that my battery was already down to 79% available. This was not good. 30 minutes in, I was down to 50%. iStat menu was trying to predict how much longer I had and the number of minutes of power left were dropping like some kind of warped time traveling machine. I went from Carpe Diem to Carpe Power Cordus. Total buzz kill. I’ve now had my MacBook Pro for nearly three years. This particular MacBook Pro is the last generation before the unibody models debuted and as such has a r
8 comments
Read more
More posts