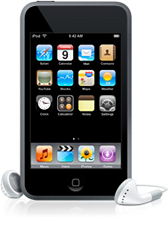 Jeff said…
I just wanted to touch (pun intended) on one thing in your post. I have large hands (ring size 14) and I have no problem typing on my iPhone.

David Alison said…
@Jeff: I have average sized hands and I feel like I need to peek around them a bit to feel sure I'm hitting the key I want. I am amazed that the keyboard works as well as it does given how small it is though. If it wasn't for my Sprint contract I would be picking up an iPhone on July 11. Unfortunately Sprint wants $275 to get out of it.
June 23, 2008 at 6:26 PM

Anonymous said…
We all do the same at home. Downstairs I have my iPhone, daughter has her iPodT. Getting on the web and email is fast and easy. Specially when we are watching a movie and look up tidbits about it on IMDB. Email is a joy to use, unlike BB and other smart-phones with no rich HTML emails. I mean everything you usually need to get info on is right there at our fingertips with very little compromise on usability or how the data is displayed.

For smudges, I've tried the PowerSupport Anti-Glare film. It really keeps the smudges to a bare minimum, but at the expense of having a bit of a grainy view. It's anti-glare also. So if smudges drives you insane, give it a shot.
June 23, 2008 at 8:29 PM

mbmcavoy said…
I'm looking to take advantage of the same deal, via my mother-in-law who is a preschool teacher.

Even though I'm planning to purchase at the local store, I've researched it online, and her school isn't on the qualified list. I called 1-800-MY-APPLE today, and got a terrible run-around, including the local store. No one could tell me what verification process is needed!

Any pointers on what is needed? Is just a pay stub enough, scout's honor (albeit questionable in this case), or does the school need to send in something? Also, would it be a problem if the payment/rebate were in my name if she is present at the time of sale?

Anonymous said…
i have 3 ipods for different purposes - my old 512mb shuffle for the gym, my 40gb classic for my car integration and my 8gb touch for work. i love my touch the best. not only is the interface unlike anything else on earth, it really is a mini computer. email, the best mobile browser on the market (flash is coming soon) and instantaneous booting make it so easy to use the internet when i'm out and about at a hotspot, wardriving or at home when i dont feel like booting my mbp. plus, when the app store is in full effect, the touch experience will be that much cooler.

David Alison said…
@Mike.Mcavoy: I'm not sure exactly what you will need. When we purchased ours my wife was there and had her school id with her, but her school is listed with Apple so it was a no brainer. Apple's web site implies that you must be either K-12 or college. If the school is pre-school only then that may be a problem.
June 23, 2008 at 11:49 PM

"Employees of public or private, for-profit or nonprofit preschools" seem to be in. (http://www.apple.com/backtoschool/, click on "Find out if you qualify", the last bullet-point) It's a small non-profit preschool, and they don't have employee IDs.

As far as I can tell, the best bet is to go to the store, and see if a pay stub will suffice as documentation. Fortunately the school name is quite descriptive!

Anonymous said…
If you're feeling adventureous, hack it and install Installer.app! There are some amazing third party apps available
June 24, 2008 at 1:20 AM

ukann said…
If you still need to peek around to make sure you're hitting the right key, try to get out of it and trust the auto-correct feature. It's incredibly smart and will guess what you meant to type if you make a mistake, usually based on what keys are around. For example, typing "grllo" it will suggest "hello". Just hit the space bar and hello will be typed. Once you learn to trust it, you'll type without thinking about any mistakes. Took me about a week to get used to it on my iPhone but now, I never think twice about the keys I'm hitting.
June 24, 2008 at 1:30 AM

MagerValp said…
Unfortunately my experience with Apple rebates is just the opposite. I took advantage of their MacBook + "free" iPod two years ago, as part of the Back To School promo (I work at a university). To get the money back for the iPod you had to fill out an annoying paper form, send it together with the receipt to *England* (I live in Sweden), then wait a few weeks before the money showed up. Of course, all that arrived with the computer was a delivery notice, and not the receipt. It conveniently arrived just two days before the rebate offer expired (iirc 8 weeks after purchase). The window of opportunity was less than 24 hours.

This was two years ago, and maybe Apple have changed their rebate policy now, but I'm never touching a rebate offer again, ever.
June 24, 2008 at 3:44 AM

Really hope that the "BackToSchool"-program will comming to Denmark. :)
We had it last year, but nothing new from Apple... :(

Anonymous said…
Thank you so much for visiting my blog.

I have been really impressed by your intelligent and interesting writing on Mac.

I modified my post, including your name and blog address.

I tried to send my trackback to your original post, but in vain, which I can't see why. Maybe something's wrong with my blog system.

Please visit my post again and check if I did the job right.

Anonymous said…
I have a Touch and a Blackberry - the Touch virtual keypad is far better! The BB keys are microscopic... rather have an iPhone, but work won't allow that.
June 24, 2008 at 8:28 AM

Anonymous said…
Congratulations on the great deal, there is nothing better than getting something for free!
June 24, 2008 at 3:16 PM

Legit Freebies Guy said…
Yeah, Apple makes great products. I only wish their products were not so darn expensive.
June 24, 2008 at 9:42 PM

Anonymous said…
To follow up on my comments above. Tuesday night we made the deal, and it was the best-case scenario. The salesman looked at her pay stub and driver's license, and called that verified. The school wasn't listed in his terminal, and he muttered "I'll just put the [local university]". :)

I also hadn't noticed the current printer deal, but they free HP multifunction printer as well!

David Alison said…
@Mike: Thats outstanding man - enjoy the new Mac! If you read through some of my earlier posts you'll find quite a few that may help you out.
June 27, 2008 at 9:17 PM