We are Apple - a blast from the past 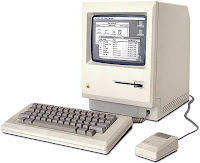 Though I have only been heavily into Mac for about 4 months now I actually have owned a Mac in the past. In late 1983 and early 1984 I worked at an authorized Apple computer store while preparing to drop out of junior college, selling PCs and Apple computers. I was as excited as anyone when the Mac came out and since I worked for an authorized reseller I was able to obtain a Mac at a heavily discounted price. As I recall I paid $2,300 for a 128K Mac and an ImageWriter dot matrix printer. That price also included a big padded carrying case for the Mac.
There was little software available though because we were resellers Apple also included MacPaint and MacWrite. With little to do I amused myself endlessly by grabbing my past coursework from school and creating reports that I could have turned in had I had the Mac when I was still in college. The game changer was just a tad late for my academic career. I ended up getting rid of the Mac a short while later when I landed my first gig writing DOS based applications, then spent the next 24 years in the world of DOS and Windows.
I tell you this little story to set up the video I found yesterday while looking for coverage of the Apple WWDC. Presented at the beginning of 1984 with the release of Mac, I watched this video and was taken back to the time of big hair, alligator shirts with turned up collars and shameless rip offs of the Flashdance song. When you watch this video you will be hard pressed to connect it with the same company that now creates the slick video presentations we see today.
Put on your Way-Back glasses and check out this gem:
Of particular note is the point at marker 2:47 when the guy walks into the office building with a Lisa slung under his arm as though it's a portable.
To quote Irene Cara: What a feeling.
Mac

Mike D. said…
I remember using that Mac for school projects. My mother got it from the school she was teaching at...it was way cooler than using DOS based Word Perfect and Lotus 123.

David Alison said…
@Robert: I seriously debated putting a NSFE disclaimer on this (Not Safe For Eyes). It is an excruciating video to watch, yet I have now a couple of times.
June 10, 2008 at 9:53 AM

Anonymous said…
Interesting to see Apple IIe, Apple III. Lisa and Mac all pushed as solutions at the same time. Obviously a multiple vector situation that couldn't last. Ad quality is what you would expect of a performance booster for Mac sales organizations. It can't be compared to a customer targeted ad to fit TV. Yeah the 80s (and very late 70's) were a cultural quagmire that should never be repeated.
June 10, 2008 at 10:53 AM

Anonymous said…
This looks like a new-employee video, or something played before an all-company meeting.
June 10, 2008 at 11:35 AM

David Alison said…
@John: According to the YouTube page it sits on this was for a sales roll out, back when Apple did not have their own stores and depended on authorized resellers. Since I worked for one back then (83-84) I likely had to sit through this but conveniently erased it from my memory.
June 10, 2008 at 11:39 AM

Anonymous said…
I liked the scenes where people are huddled around the Mac about 5" from the screen...you had to do that because the screen was so small!!
June 10, 2008 at 3:32 PM

Anonymous said…
Well, my first thought was, "I don't get it--what's so terminally wrong with the visual style, especially these days when it seems everyone's aspiring to a role as one of the drones in the '1984' commercial??"

You see, I could get that impression because the first time I watched it I had the sound off (I was at work). Well... "Not Safe For Ears" might be more like it. Just goes to show the power of music--even bad music--to influence our attitudes toward the things that are paired with it.

Beyond that, sometimes you have to see things in their context to appreciate them--putting things in the wrong context can make even good things seem bad much of the time. "Excruciating"? No, there's plenty worse, like, say, Smiths videos... :-P And yes, it's corporate material--I'm not sure today's corporate material is any better.
June 10, 2008 at 9:46 PM

RASTERMAN said…
Hey David, that video was too funny and a little scary at the same time! And yet oddly I've been humming it all day! Thanks?

David Alison said…
@RASTER: Thanks man! I have the same problem, can't get the stupid song out of my head.

I thought about making this another post but figured the comments are as good as any place:

Here is a video of an Apple shareholders meeting in the Fall of 1983. It starts off with a black screen and the music from the above video in it - you can hear people clapping to the rhythm in the background. It quickly cuts to a very young looking Steve Jobs bobbing his head to the music before he presents an introduction of the original Macintosh.

Great watch if you are at all interested in Apple history.

How about it folks? Found an interesting old-school Apple video that brings back memories?
June 10, 2008 at 10:26 PM

bleach1st said…
lol this was made before I was born :D how sad... cool vid tho, makes me see how far 'portable' computing has come.
I complain about how my MacBook Pro is big sometimes... just imagine lugging that huge computer on the video :O
June 11, 2008 at 1:43 AM

Robert said…
For comparison, here's Microsoft's assault on all that is tasteful in their 80s 386 Windows promo. Warning: just like the apple video above, this is painful to watch and hard to stop watching. As David put it: NSFE (not safe for eyes)

David Alison said…
@Robert: AAHHHHHHH! My Eyes! That was unbelievably horrible! I did love at the 7 minute mark where she starts rapping and then puts on a Madonna outfit to finish her document though. Holy crap that was bad. Nice find.
June 11, 2008 at 11:13 AM

RASTERMAN said…
@robert: That's 12 minutes of my life I'll never get back!

I think a lot of this video, as cheesy as it is, is actually relevant to where computer science is heading today.

I would love to have all of the technology that is presented here.

This video is available on YouTube in several versions and in multiple sections, but the link below is to a site with full digital quality in MPEG4 format. It's big (274MB) but worth the wait.

The video was for in-company consumption.

Darkglobe1977 said…
My first ever computer was an Apple IIC and I got it circa 1986,
I loved that thing and am really sad we got rid of it back in the day. I too have not been back to Apple ever since apart from the odd Ipod and am just about to get a MBP, It's like welcoming back an old friend!
June 13, 2008 at 1:50 PM