Working from home - why it used to be so hard

February 08, 2011
I've long been an advocate of people in a technology-oriented job being able to work from home, even if it's just a day or two a week. I've even provided some tips on working from home on this blog. In the early days of my software engineering career, working from home had some significant obstacles that really don't exist today.

I tried to work from home once I had a serious commute. Back then I lived in Los Angeles and had to spend an average of 50 minutes commuting to work and back every day. Over 400 hours a year spent staring at tail-lights and bumper stickers in LA traffic. It was just awesome. My bosses at the time didn't like the idea of me working from home because they didn't think I could be productive from there. Relative to today's technology, I can see why.

A Different Time
Back then (1988—1994) my ability to work remotely was severely limited. I used a modem to dial into my office computer using PCAnywhere and hoped that my wife didn't pick up the phone in the middle of the call. She seemed to have an uncanny ability to do that. I would look at my phone bill at the end of the month and realize that the call to the office was costing me 15 cents a minute because the phone company considered that "long distance". The phone company was always changing the call rates and packages, so I never knew what the calls would cost until after the fact.

I did have a cell phone. It was a large brick-like device that worked incredibly well while standing directly underneath a cell phone tower, but it dropped calls if I even looked at a tunnel. I rarely used it because to keep my monthly plan affordable I had to pay nearly 80 cents a minute for air time.

I did have access to instantaneous communications through my pager. It was just like SMS is today, except that I could only receive messages and the messages themselves could only be numbers. Since I had some IT responsibilities back then I had to keep that pager nearby. I could either set it to belt out a high-pitched sound that gave me a case of cardiac arrhythmia when it sounded or set it to silent and miss the page. Stupid thing didn't even have a volume setting.

Though the Internet technically existed back then (I started using it regularly in 1993 from the office) there really wasn't much on it. We didn't have search engines so we used this as our Google: 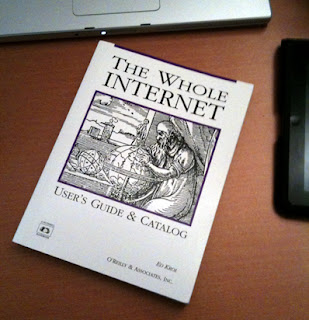 (Yes, I kept the book. Just couldn't throw out that history)

As a software engineer I needed reference material. Virtually all of the documentation I needed to reference came in heavy book form so if I was going to be working from home I'd pack up the two or three heavy duty books I needed in a backpack and lug them home. It was a great workout and given the time I spent commuting, about the only workout I got.

In spite of all these hassles I was eventually able to convince my bosses to let me work from home one day a week. Friday was usually a slow day at the office and traffic was usually at its worst, so that was often the day.

Since I had to go through so much in order to "telecommute" and work from home back then, I'm amazed at how much easier it should be today. Even with all of the advances, many companies don't embrace it. I put together a post on the SharedStatus blog: Working from home - justifying it to the boss. Please take a read and let me know what you think.

How about you?
It's great to see how far we've come in terms of "telecommuting" technology, a somewhat anachronistic term now. What technology did you use to work from home back in the day? Drop a note in the comments and we can compare war stories.
Tips

David Alison said…
@Chris: Amazing to me that the bulk of the Internet back in 1993 (my edition) could be summed up in 376 pages, which included not only detailed descriptions of how it worked but a "complete" catalog of sites.

Unknown said…
I remember the first time I asked my boss about working remotely, he asked that I present a business plan justifying the request, outlining the metrics used to measure performance and work output, and assurances that the "home" part of working from home wouldn't interfere with my primary tasks. Now if only I could remember the name of that guy, began with a "D", I think... ;)
February 9, 2011 at 8:03 AM

David Alison said…
@Sean: Where do you think I got the list from man? Little did you know that you would become a case study for my blog years later.
February 9, 2011 at 8:14 AM