Three iChat Features You Should Know About

May 18, 2011
As I wrote up my last blog post on Skype alternatives I started seriously looking at iChat again. Since I had been using Skype for my video chats and Adium for my IM communications, iChat never seemed to have that little blue orb beneath it in the dock bar to indicate it was running.

When I first switched to Mac over three years ago I played with iChat and relatively quickly dismissed it as a cute toy. The cartoon bubble discussion was cute but not compact enough for my relatively heavy IM usage. The video chatting was cool but after playing with the effects button and carrying on a video chat while riding a moving roller coaster I quickly concluded that this was a fluffy consumer novelty and moved on to other applications for my business needs.

Researching alternatives to Skype changed all that.

The more I played around with iChat, the more I learned about some interesting features, especially if the people I was communicating with also had iChat available to them. More and more of my friends and business associates now have Macs than ever before and iChat is already installed so it's really not that hard to leverage. For the most part if you see the Video Conference image:

to the right of their name in your buddy list, you can leverage all of the features below: 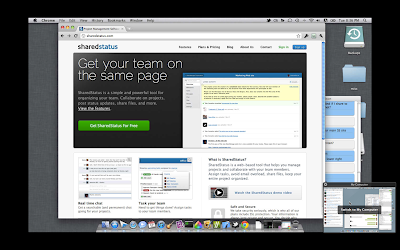 Screen Sharing
As a person that provides technical assistance to my family and friends, being able to trouble shoot a problem without having to go to their computer is a huge help, especially when they are hundreds or thousands of miles away. Having the ability to share a screen and actually manipulate it as though it's local is also great for demonstrating something I've built locally to one of my colleagues.

With iChat you can initiate either a "Share my screen" or a "Ask to share their screen" connection. While connected a voice chat channel is opened and you can speak over it while you work. To start up a screen sharing session, Control-click (or Right-click) a buddy name in your iChat list and select the sharing direction you want.

While the screen is active you can jump between the two by clicking on the screen in the lower-right corner.

A couple of notes: You can end the session by closing the small box in the lower right. This will also terminate the voice session. Pressing Command-Q or Command-W will not end the session—those commands will be sent to the remote screen and likely close the current application or window that's open.

Multi-Person Video Chat
With iChat you can link up to four people together in a video conference. Though obviously limited to a very small group, having four people able to easily see one another and carry on a discussion is amazing for an application that's simply included with OS X. Though Skype now offers video conferencing with up to eight people, it requires a paid subscription in order to use it.

Once you establish a video connection with a person you can add others to your chat by clicking the Plus symbol at the bottom of the video chat window and adding another buddy. If you are communicating with people using AIM accounts you can even join a chat room and keep a running text log as your meeting progresses. 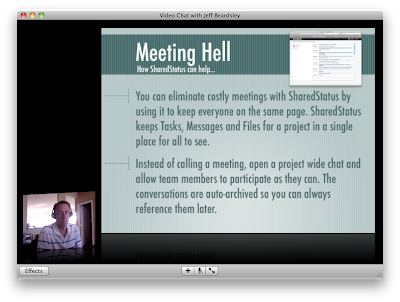 iChat Theater
Another great little feature of iChat is the iChat Theater. Once you have a video chat running with someone, click the Plus symbol at the bottom of the window and select the option to share a file through iChat Theater (or simply drag the file to the video chat window). The image of the person you are video chatting with drops down into the corner and the image or file you are presenting takes over the main part of the screen. This is great for reviewing images or paging through a Keynote presentation. There are reports that the next version of OS X (Lion) will support sharing web pages.

iChat Theater also works when doing multi-person chat; as a presenter your multi-chat window is taken over by whatever it is you are sharing, as you can see below: 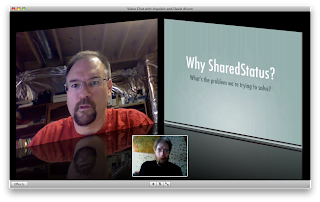 Important Tips
When you have a single or multi-user video chat running you will see a Mute button in the lower portion of the screen. Clicking that will mute your audio, but not the audio on the other end. As a result, if you click Mute your chat partner will continue to be both seen and heard and your video will continue without sound. If the other person mutes the sound, don't say anything stupid like "wow, when is this going to be over?".

Holding down the Option key transforms the Mute button into a Pause button. This both mutes the audio from your end as well as freezes the video from your end. Like Mute only, this only applies to your feed; the other end is still visible and audible.

For years now my friend an Mac super-user Ast Moore has been telling me I should be using iChat instead of Adium. Now I'm starting to see why.

Got a video / screen / file sharing tip with iChat? Please drop a note in the comments!
Mac Review

Keleko said…
I had no idea iChat had all these nifty features. Unfortunately none of the people I chat with regularly at work have Macs, so I can only use Adium to get to them. If iChat could connect to Yahoo Instant Messenger, then I'd use it instead.
May 18, 2011 at 11:36 AM

Anonymous said…
No real tip here. Just wanted to say that I love iChat. I use Adium for regular IM and switch to iChat for video chatting, sharing screens, etc. I find that the video quality is much better than Skype and it is *much* easier to use. Also, it's nice that you can interface with GTalk now. Most people I know have gmail (more than skype), so it makes it easy to get started.

Finally, iChat theater can have advanced features depending on the document. Like I've been able to use iChat with OsiriX to share MRI images! Very neat.
May 18, 2011 at 10:56 PM

Mark said…
hi David...I have an unrelated question. do you know if Time Machine backs up VirtualBox virtual machines? I looked in the documentation for VirtuaBox and could not find anything.
July 13, 2011 at 12:45 PM

David Alison said…
@Mark: I'm not familiar with how VirtualBox stores its OS images but chances are it's in a single large file. If that's the case then TimeMachine will struggle with that, especially if the file is 4GB or larger.

I manually exclude my Fusion OS images from Time Machine. Instead I have a scheduled Automation task that copies the Fusion images every night at 3am to my backup drive.

Sure, I don't get versioning doing this but given the size of my Fusion images I would likely blow out my backup disk space very quickly if it created a full copy every time the image changed.