August 21, 2018
When you lose a child the number of challenges you face is profound. One of the reasons many grief stricken people disconnect from their prior lives is that the reminders of their loss are everywhere. I experienced this first hand after I lost my son in a car accident in July of 2016.

As a purveyor and advocate of technology for over 30 years, I had always been a fan of the sharing nature of the modern internet. Easy access to information opened completely new and innovative ways of solving problems for me, and I embraced it fully. Over the last few years social media has evolved, pushing more and more automated engagement on it's users.

Social media is both a blessing and a curse to the newly bereaved; it can be a primary conduit for connecting with friends and family. In our case it allowed us to see all the wonderful acts of kindness people were doing in our son’s name, receive links for inspirational videos and articles, and do research on how consciousness could survive physical death.

There were several dark sides to this connectivity, however, among them local news sites and community forums. When the police put out the press release about my son’s accident they added at the end that “alcohol may have been a factor,” though I knew that Davey had not had anything to drink for at least two days before the accident and there was nothing found at the accident scene to imply that he had. Later the toxicology report would confirm that he had nothing in his system, but it wasn’t a news story by then.

Having been online since well before there was an actual Internet, I’m familiar with how brutal people posting anonymously can be. Friends told me that some people in community based message boards had speculated about my sons accident, judging him based on that erroneous police report. Personally, I avoided using Google to find out what news was out there on my son, and stuck to very limited social media channels. Unfortunately, though, that didn’t always help.

When a friend suggested I visit his Facebook page to view his artwork, a picture popped up of Davey and his friend Spencer, from eight years earlier. I had brought them to a Caps hockey game to celebrate Spencer’s seventeenth birthday. Facebook suggested posting this happy memory to my timeline. 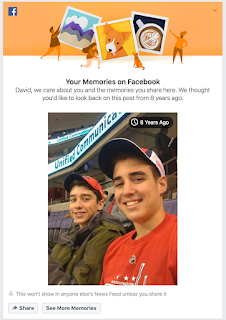 It was seven months to the day after Davey had passed.

Seeing the smiling face of my son at sixteen was difficult at that point in my journey. I immediately made the calculation that I would, at that point, have eight years and five months left with him physically. If I knew that then, would I have done things differently? These were the thoughts that dominated my mind at that point. 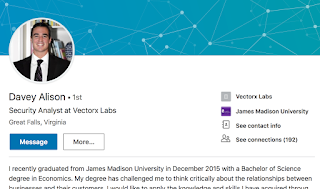 LinkedIn recommended that I log in and congratulate Davey on his one-year work anniversary, a year after he started work with me on our start-up. The email included a picture of Davey in his suit, flashing that big smile of his. I had taken the photo of him a little over a year earlier and I knew that while he looked all dressed up he was actually wearing shorts, since it was just a headshot. While I loved that picture, having some system decide I needed to see it right now wasn’t helpful. 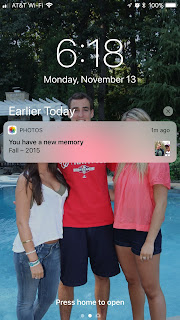 Even my iPhone got in on the act, at one point giving me a notification that it had created a new “memory” for me. I could see a little photo of Davey in the message and slid the notification to open it. Suddenly I was witness to a video montage of Davey pictures set to snappy music, wrapping up with the last short video I had made of him. That video was the one I had shown to the police officers to confirm his identity after the accident.

These digital landmines seemed to be everywhere, and I had to learn how to step on them without triggering an explosion of grief.

Figuring out all the various settings to make these notifications stop didn’t seem like a solution. There would always be reminders, and trying to make my happiness depend on never seeing them created too many conditions for that happiness.

Recovering from the emotionally difficult parts of grief required that I control what I placed my attention on. It wasn’t just some emails and pop-up notifications. I would never see Davey get married or become a father himself, would not get to see him develop his career, go on our backpacking trips or big family vacations. The list of things I was missing out on was huge and everything seemed to bring them up; the reminders were unavoidable.

Initially I tried to address this by focusing on what I did have—an amazing wife, two incredible daughters, a large, loving family, and friends that were always right there for me. While that helped, it didn’t last. It just felt like there was this large black hole in our family that I simply couldn’t avoid.

It didn’t matter how many times I bargained with God or played what-if scenarios, there was nothing in this world that would change the fact that Davey was gone physically. But he was still with me in a very real, spiritual way. I learned that I needed to not just accept that but embrace it.

A counselor from the group Compassionate Friends visited us a few days after the accident and told us that grief was like carrying around a brick in your pocket. It was heavy and painful but after a while you would pat the brick to reassure yourself that it was still there. Frankly, that felt like a sad way to continue through life.

What I needed to do was focus on Davey as he is now; his physical presence was gone but the energy that powered his body was still around. I had started a meditation practice and as a result learned to quiet my active mind and embrace the stillness between thoughts. As I did that I found that I could connect with Davey in ways that were even more powerful than the conversations about life we used to share.

I love my son unconditionally. It never mattered what he had said or done, I would still love him. That's loving without condition. Learning to be happy meant that I needed to remove the conditions I had placed on my own life in order to achieve happiness.

I began to accept that Davey’s physical life was perfect exactly as it was, from beginning to end. He really had accomplished everything he was meant to accomplish and he did in fact set my wife, our daughters, and me on very different paths than we would have been on without him. I also accepted that the version of Davey I now experience is perfect, exactly as he is.

Eliminating the conditions I had placed on how I viewed my son, accepting and embracing the version of him I have now, allowed me to move forward. I didn't "get over" my son, our relationship evolved.

As a result, those digital landmines had become inert, incapable of blowing up my emotions every time I encountered one.

Note: This post is adapted from my book Finding Davey: A Father's Search for His Son in the Afterlife, available on Amazon in both paperback and Kindle formats.