March 30, 2008
I am out in Southern California visiting my parents and brother. Before I left I debated on packing up my camera, a Canon 30D and the usual kit I travel with when I know I'm going to be taking some photos. At the last minute I went on a "travel austerity" program and shed myself of my camera kit - so I arrived in California camera-less.
While it was great to not have to lug the rather large bag around through the airport, shortly after arriving I regretted not having the ability to take pictures. I had been thinking of getting a nice little point and shoot to compliment my DSLR - something I could just put in my pocket at a moment's notice and use on demand. I also liked the idea of being able to shoot light weight video easily. 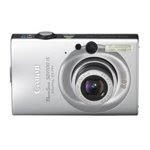 My brother, always an enabler when it comes to spending money, took me over to Samy's - a camera store in Santa Ana, CA. Since I'm a hardcore Canon fan I immediately went to the Canon 1100IS, a nice little 8MP point and shoot.
The big selling points for me was an actual viewfinder, extremely quick recycle times between pictures and a user interface I was already pretty familiar with. I've been shooting with DSLR's for so long I forgot how handy these little cameras can be.
Of course, you can't leave a camera store with just a camera, otherwise the salespeople get taken around back and are beaten for not selling extras I guess. The sales guy asked if I needed an SD card. No, I've got a 2GB card already. 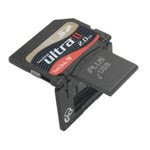 Then he turned on the sales charm and said "Have you seen this? It's an SD card that folds in half and can be inserted directly into a USB port - no external drive needed". Wow, that looked pretty cool.
And then he gave me the kicker: "We bought 2,500 of these things so we're selling them for $15".
Sold.
Now equipped with both a new camera and the memory to store our, uh, memories my brother and I hunted around for something to shoot. Since he's a car nut and recently imported a Nissan Silvia from Japan, my brother had the bright idea that we could use the video capabilities for a quick action shot of his car.
I figured it would be a good quick test of the camera and I could also play with iMovie a little bit. What I was surprised by was how quickly I was able to get the footage into iMovie, trim it, add a sound track and subtitle, then upload it on YouTube directly from within iMovie.
Here are the results:
Sure, it's not much but it took all of about 20 minutes to put together and upload. And it is a pretty cool car!
Mac Review

Anonymous said…
And there you go, thats what iLife is about. Making it easy to just get this stuff out there without worrying about all the little details. iPhoto was a big reason I really started to like the Mac as a platform, way back in the days of 10.1. Here I am on 10.5 and iPhoto 7, and my library still works after being upgraded through every version.

If you start converting family members who aren't really into computers, I'd recommend getting .Mac for them. Yeah, it's kinda a pain to have a yearly charge, bit it was much easier explaining to my family to just click on the Web Gallery button then it was to try and explain how to export, then import into Flickr or something.
March 31, 2008 at 1:52 AM

Chris Howard said…
Dave, good to see the driver sitting on the proper side of the car! ;)

Anonymous said…
If you think iMovie 8 is good, try downloading iMovie 6. It's more complete in many ways. While it won't work with iMovie 8, they each have their separate strong points.
March 31, 2008 at 9:18 AM

David Alison said…
@Tom: it really was simple. iMovie takes a little getting used to if you've been playing with Windows Movie Maker. I'll be writing up a post soon about the main differences.

@Chris: Driving a right-hand-drive car in the States is a challenge. Shifting and pedal operation was no problem but nearly every time I tried to use the turn indicators I would turn on the windshield wipers :-)

@Vulpine: I was disappointed to find that iMovie 8 did not have an ability to apply a slow motion effect to a clip. Was that in iMovie 6? As I understand it the UI between the two versions is quite different and having just started to learn iMovie 8 and unlearn Windows Movie Maker I don't know if I want to deal with another UI right now. I'll probably try out Final Cut Express or Pro at some point because there are a few things I am missing (Slow Mo being the main one).
March 31, 2008 at 9:46 AM

N45800 said…
iMovie '06 was the last version of the original iMovie code base. The original iMovie came out in '99, and (supposedly) Microsoft copied to make movie maker. Apple re-created iMovie '08 from the ground up to be simpler for people who know absolutely nothing about video editing to get started, and quickly edit their movie. iMovie '06 is available for free from Apple, and is currently much more capable (iMovie '08 is basically a 1.0 product, the previous iMovie ended at version 6).

iMovie '06 is timeline based, and has a ton of additional effects, but isn't as simple as '08. If you want a newer app that works like the old timeline-based iMovie, Final Cut Express is probably the recommended app.
March 31, 2008 at 12:29 PM

Anonymous said…
I'd recommend trying iMovie 06 out first before jumping up to Final Cut. iMovie is really built around these types of quick movies, Final Cut adds a ton of power, but with the disadvantage of also adding a ton of complexity.

David Alison said…
@n45800: Thanks man, that makes sense now. I was wondering what the history of this was. Having stepped into the modern Mac world from Leopard I don't really appreciate even the things that were available in Tiger.

@Tom: Thanks for the link. I downloaded it and started playing with it and sure enough, it's a much easier transition from Windows Movie Maker because of the timeline view.
March 31, 2008 at 8:22 PM